You know that girl you follow on Instagram? The one with the perfectly sculpted body, impeccable bone structure and equally immaculate hair? The one with the flawless complexion and all-year-round sun-kissed glow. Yeah, you know the one? She’s always attending the best events, off on adventures and travelling to exotic destinations. She doesn’t go a day without posting a snap in another beautiful location, wearing another amazing outfit and hanging out with her exclusive posse. She seems to have it all. The beauty, the boyfriend, the wardrobe, the success. She is living the dream life.

Or so you think. 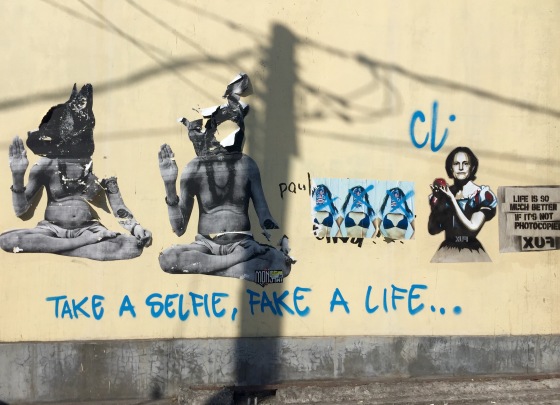 Social media isn’t real life. Groundbreaking stuff I know (sarcasm). But seriously, as obvious as it sounds, it is as easily forgotten. Scrolling through the socials is so engrained into our daily routine that we have become completely desensitised by what we see. It’s totally normal to see bikini babes and bootys while sipping on our morning coffee. Or be bombarded with socialites cheersing their cocktails (mate, its a Tuesday!) while the rest of us commute to work. And yet, we don’t even think twice because, #Instagram.

But I’m here to deliver you a #TruthBomb! (Admittedly, one you’ve probably heard a number of times before, but it’s an important message nonetheless).

No one’s life is as perfect as their Instagram feed.

No one’s! Not even the chick you were thinking about when you read that first paragraph. As much as the Grammers’ and Fakebookers (*cough* I mean, Facebookers) want you to believe their life is all sparkles and smiles, it just ain’t the case! What you see on social media is only a snapshot. A mere snippet. Just 10% of someone’s life. (If that!) All carefully and craftily selected to paint a picture of the ‘perfect life’. Each photograph chosen to represent a perceived version of reality.

Even what I portray on social media isn’t accurate to how I spend 100% of my time. More often than not, I walk around with a messy bun and a bare face. I certainly don’t wear makeup to the gym and I rock my daggy old clothes way too often. And guess what, sometimes I even post photos of me somewhere cool when *shock horror* I’m not really there. (Most likely I am just lying in bed). And it’s not because I want people to believe my life is all sunshine and rainbows every day. It’s because, well, it’s boring and honestly, nobody really cares. That’s the thing about social media though. The user, Grammer, FBer or Tweeter are the ones in control. So naturally they mainly share their ‘best bits’.

As long as you can distinguish the difference between Instagram and reality, its all good. But when you start comparing yourself and your life to someone you follow on the Gram, that’s when it gets a little dangerous.

Comparison in any form is stupid. Pointless. (And a great way to feel shitty, pretty quickly.). So when you add social media into the mix, you’ve just hit a whole new level of dangerous comparison. You’re no longer sizing yourself up against someone you see in the ‘real world’, but you are comparing yourself to an unrealistic version of someone. Instagram is all filters, editing, smoothing, refining and perfecting a pose. It’s taking 40 almost identical selfies to choose just one worthy of being broadcast to the world. Why on earth would you compare yourself to something so unobtainable? Something the person in the photo themselves cannot even achieve without a filter and FaceTune.

And yes, admittedly some of these instafamous and social media influencers may be living a somewhat more glamorous life than most of us commoners, but they are still human. They may get paid to attend A-list parties and spruik brands, but they still do normal stuff too. Your insta crush may be your ultimate #bodgoals, but I bet they still have their insecurities. I’m sure they still have their off days and heck, I bet they still walk around make-up free, with a greasy top knot and ugly trackies on sometimes too.

That’s what you have to remember. What you see on social media is only a highlight real. An unrealistic perception of someone’s life. A story. So quit the comparisons. Stop allowing your self worth to be determined by what you see on social media. No more comparing your behind-the-scenes to someone else’s highlight reel. The fact is, you will never be someone else. So why bother? You are unique, individual and that is something to embrace.