What do you do when your sister stuffs up your registrations for Stampede and you can no longer join in on the mud-filled fun? Take a long drive to Fremantle and get a delicious feed at The Raw Kitchen instead!

Not quite the same as the action-packed 10km obstacle course we had prepared ourselves for on our Saturday off, but still enjoyable nonetheless.

So basically, Jess and I had signed up to get down and dirty, commando crawl through mud, and shocked by electrocuted barbs (sounds fun doesn’t it?!) at Stampede this weekend, but unfortunately a little technical error (cough, Jess, cough) put an end to that idea.

Seeming it was meant to be part of my early birthday present, plus I had taken the day off work for it, Jess suggested we do lunch instead. So I suggested we smash the gym in the morning then head to The Raw Kitchen in Fremantle afterwards.

I had visited Raw Kitchen for lunch with a girlfriend a couple of weeks prior and had such a incredible culinary experience. We both loved it so much that I was eager to go again and of course to introduce Jess to its amazingness.

However, our experience this time was less pleasant than when I had lunch with my friend just two weeks ago, which is always disappointing, especially when you are taking someone new there after having talked it up so much. Do not get me wrong, it wasn’t the food that was the let down. It was the service. The lady who greeted and seated us, was very cold and didn’t smile, not even once during our entire interaction. Every staff member who came to our table from then on was equally as hostile.

Other than that, the food was awesome… some might even say RAWsome! (see what I did there?). With so many mouth-watering options to choose from, we struggled over the menu for a while before finally deciding on the Raw Pumpkin Pizza and Raw Pad Thai. We shared the two dishes, so we each got a taste of them. 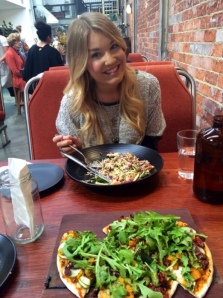 Both dishes came out looking pretty dam tasty but it wasn’t until we dug in for our first mouthful that we were wowed by the big flavour punch. The Pad Thai, made with zucchini noodles (zoodles if you may), was so rich in flavour, with delicious fresh herbs like coriander and kaffir lime leaf. The pizza, on buckwheat pastry base tasted of rich tomato paste and fresh basil pesto along with the sweetness of the roasted pumpkin. Seriously amazing! Both Jess and I found ourselves going from one dish to another thinking ‘I don’t know which one is better?’

I also ordered a cheeky raw dessert. Choosing from the raw dessert cabinet is quite a daunting experience. Not only because none of the items have labels on them to indicate what the heck you would be ordering, but there are so many decadent looking desserts that it made it very difficult to decide. I ended up going for the Turkish Delight slice, which was yummy but insanely sweet. I think I had two bites before I asked one of the grumpy staff to put it in a takeaway container for me to take home. (It’s still in my fridge – its a one small bite at a time kind of dessert, its that dang rich).

If you want a healthy, tasty meal packed full of amazing flavour and nourishing ingredients in a restaurant with an awesome, retro, warehouse-like décor and chilled atmosphere, but don’t really mind about unfriendly service, then check it out! Despite the pretentious staff who clearly have never heard of the term ‘service with a smile’ it is well worth a visit. The service itself was still very quick but it just wasn’t accompanied with a friendly face. Even if you are a meat-lover, dairy-lover or generally not into the idea of ‘raw’ foods, check The Raw Kitchen out. You’ll be pleasantly surprised about how satisfyingly tasty healthy food can be. These meals are big in size, big on taste and big on flavour! Highly recommend. Let us know if you try it out and what your experience was like!

2 thoughts on “Raw Food With Attitude”